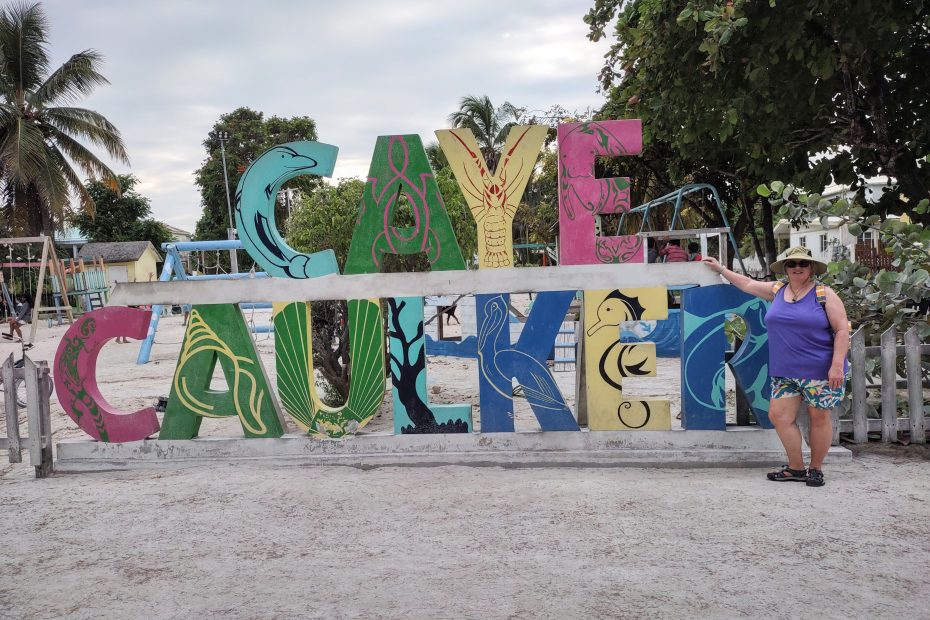 We had our first housesitting assignment lined up for end of April through beginning of October in Teakettle, Belize. Teakettle is a tiny town in the Western part of the county in the rainforest. We knew Belize also has beautiful beaches and the world’s second-largest barrier reef, so we decided to go a little early and spend a month on Caye Caulker (pronounced “Key Calker”), working remotely.

At first we were only going to stay2 weeks, but the AirBnB we found was CHEAPER if we stayed four weeks rather than two. SOLD!

To get to Belize, you fly into BZE airport in Belize City. BZE is a very small airport by American standards. Not so much gates as parking spots. Then wait in line for Immigration, then for bags, then wait in line for Customs. Our AirBnB host, Cindy, had arranged for a taxi to take us to the water taxi from the airport, so when we finally emerged, there was a man with a sign for “Beth Copenhaver.” I felt like a movie star. Wish we’d taken a picture, but we were still rather flustered and needed to hit the road to make the 1:30 water taxi.

Again, Cindy had arranged for a taxi (golf cart) in Caye Caulker to take us from the pier to the house in South Point. All our bags made it (YEAH!) and our driver was nice enough to stop by the convenience store on the way for us to get a few supplies.

Our home for the next few weeks was named Wish You Were Here (next door to Comfortably Numb), and it’s at the southern tip of the island. Pretty remote, about 1.3 miles from the southern end of “town” by bicycle.

South Point is known for being “off the grid,” using solar power and rainwater for most things. Ecologically responsible tourism? I guess so. We had chosen the place because it was on the water, it had high-speed internet, and a king-sized bed. We didn’t care that there was no TV or dishwasher. I did come to care that there was no AC. Luckily we were there in March/April before the really hot weather set in, but there were nights when the fans just weren’t keeping it cool enough for me to sleep well. Lesson learned – I’m a spoiled American and I really need my AC if the temperature is going to be in the high 70s, low 80s at night.

A month on Cay Caulker

A month sounds like a long time, but it really went by quickly for me. We settled into a routine of working in the mornings (5:30 am local time) and would finish up around 2 to 3 pm. Belize is on Central Standard time, no daylight savings time here, so we were 2 hours earlier than our co-workers in Atlanta and the East coast.

The internet was very dependable, we only had issues a few times and when we let our hosts know, they called the internet provider and it was fixed within the day.

The biggest problem with working remotely was (again), the work station set-up. We used the dining table and chairs and while it was a little cramped that was OK. The problem was that the chairs were horrendously uncomfortable for any extended time. I ended up using several pillows on the seat and back to make it slightly less torturous. Not sure there’s much we can do in terms of making this better except spend more time reviewing what furniture is available before booking a place.

Mark had to make-do with just his laptop screen and the portable screen. He really missed his third, large screen. I was able to adjust to the laptop + portable screen fairly well.

Getting to town was not going to be an everyday thing, so we had a weekly routine of making a big pot of beans and rice, learning about making rice and beans (2 different dishes), and usually having a quick breakfast and heating up beans and rice for lunches and sometimes dinner too. It took us at least a week to figure out where to get the good produce (the green building across from the bakery) and buy meat. Grocery stores here are mainly packaged/dry/canned goods, not much fresh.

Anything packaged is going to be expensive, especially brands imported from the US. A box of cereal might be $15BZ/$7.50US, a bag of chips $18BZ/$9US and the Cadbury chocolate bar Mark bought for me was $14BZ! Almost everything has to be brought in from the mainland, so even the produce was about 2-3 times what we later ended up paying in Belmopan. This meant it was a great time to give up my Coke Zero habit, it was hard to find and expensive.

Many afternoons we just relaxed, enjoyed the breezes, took a swim, had a Beliken or two. We liked to take our beverages and enjoy the sunsets from the dock.

On days/evenings we went into town we usually rode the bicycles provided. I hadn’t been on a bike in decades, so I was a little worried I was going to crash, but managed to get back into it – guess you can’t forget how to ride a bike, but your balance can be much worse than when you were a kid.

We decided to take a trip over to “the big island” of Ambergris Caye and booked a lovely room through AirBnB at the Parham Hotel. Our room was spacious, with a King-sized bed, AC, and a balcony looking out at the park and ocean. We were looking mainly for a king-sized bed – very hard to find in Belize, evidently. The AC was glorious after 2 weeks without it. I slept like a rock the first night.

We decided to fly over on Mayan Air (5-7 min. flight) and take the water taxi back to Caye Caulker. Mark wanted to fly and get that nice view – I was a little trepidatious about the tiny airplane, but decided this would be another adventure. Note: even if the airport seems like an easy walk, with luggage, we should have called a taxi. A lovely lady saw us struggling and stopped and drove us the last quarter mile – good Karma to her!

We knew we wanted to go to Secret Beach, so we rented a golf cart for the 3 days – (about $300BZ). Do your homework and arrange a rental or at least get a price before you go, we were kind of winging it. Got a decent price, but in hindsight we would have been smarter to arrange before arriving.

We arrived on Thursday afternoon because a main activity we wanted to do was the Chicken Drop! Only Thursdays at Wahoo Lounge on the beach. What a hoot (cluck?)! We didn’t win, but it was well worth the trip and had a couple of beers and a delicious quesadilla.

Our location at the Parham was very convenient to some of the best restaurants in San Pedro. We wandered a couple of blocks to the Happy Grouper for dinner. Best meal I’ve had so far in Belize! Mark got a grouper with shrimp creole and I had blackened snapper with creamy shrimp. Delicious!

Our second day was Secret Beach. To be honest, I was underwhelmed. It didn’t help that I managed to fall on the steps down to the in-water seating. Banged up my foot pretty badly, but they were super nice about bringing me ice for it. Mark then make the mistake of taking his phone into the water (“luckily” we were able to replace it in San Pedro for $$$.) Much better than Secret Beach was the Truck Stop that we stopped at on the way back to town. Several food stands and bars in old shipping containers. Skip Secret Beach, but do go out to the Truck Stop.

Our third day, we wandered the town. We had some time before dinner and decided to go to the Travelers Liquor tasting room, Want Rum? Got It! We were helped by Deena, who is very knowledgeable about the company and the various rums and liquors they make. After describing each, we got to taste as many as we wanted (tiny tastes, but enough to know if you like it). Absolutely no pressure to buy, though they have most of the offerings available. As Deena said, you don’t have to buy it there — as long as you buy it where ever you are in Belize, the company is happy. We didn’t want to have to drag around too many bottles, so just got one – Belizean Rum, a fine choice for mixing. Mark later found a bottle of the Traveler’s 5-Year that he likes best for a “sipping rum.”

Some of Our Favorite Places

If you go to Caye Caulker, you’re in for a treat. Great food, great atmosphere, great people. Some highlights:

Snorkling with the Cave Man. We did the full-day trip because we wanted to get out to Hol Chan reserve. The crew was fantastic, very patient and safety-conscious. Delicious lunch too.

Sunset cruise with Wanderlust tours. One of our last weekends on the island, we took the sunset cruise. About 3 hours on the catamaran. Enjoyed the shrimp ceviche and open bar.

Happy Hour at Uno Mas bar with our favorite bartender, Rose. It was one of the first spots we would reach after biking to town with good prices for happy hour and we enjoyed talking with Rose. It’s the bar at the Sunset Cabanas, which has a very nice pool and looks like a great place to stay.

Be sure you get something off the grill at Chef Kareem’s on the beach, enjoy the fresh shrimp and conch ceviche at the Pelican Sunset grill, stop in at Wish Willy’s for fresh fish, enjoy the tiny donuts at Ice & Beans. Discover Fry Jacks at Errolyn’s – the quintessential Belizean food, as far as we’re concerned, right up there with stewed chicken and rice & beans (not beans & rice, LOL).